I met Josh at Crete airport and one of the first things he said to me was “we’re not camping.” Having spent a week in our tent aptly named “The Womb”, including one 48 hour period during a storm in the Italian mountains where he could not leave its confines, he was ready for a bed to rest his weary head. He was also pretty ready for some good food, after existing on whiskey and carrots for a little too long.

It’s basically been a week of consuming awesome Greek food and alcohol, sunning ourselves on Crete beaches, hooning about on a scooter and seeing some pretty old stuff.

Being in recovery from a savage bout of Turkish Tummy food poisoning, my stomach couldn’t really cope with a lot of food, but I slowly and persistently coaxed it into sampling the local Cretan cuisine. My body was telling me no,  but my mind was telling me “Greek yoghurt, woman!”. 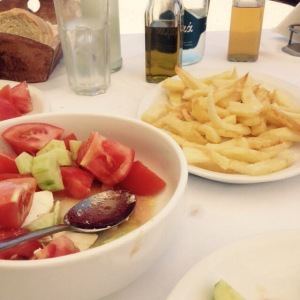 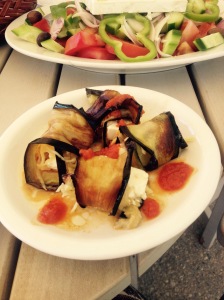 The thing I personally love about Greece is that just when you think you’ve finished your meal, they bring you a small jug of raki and a dessert platter (sometimes two!) and you just feel so fondly towards them that you tell them you will marry their son. Perhaps that’s the raki talking, and perhaps they planned that all along, but if it’s free then who’s complaining? Is he handsome? 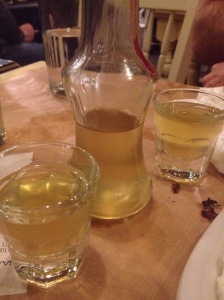 One particular night in Chania, at a restaurant on the port,  we had consumed some stuffed vegetables, a marvellous Greek salad and slab of moussaka, and we were already pretty satisfied. Then we were brought our nightly nightcap of raki and dessert, consisting of almond cakes and a plate of six glistening donuts. Josh’s inner fat boy jiggled his stomach, moistened his lips, and cried “CHALLENGE ACCEPTED !”

Sadly all I could do is sit and watch while he hoovered all six of them, which I found both mildly repulsive and strangely fascinating. Needless to say, the next day he experienced a severe food hangover, and could only muster the strength for a light, oil free salad.

A lesson we learned: you don’t have to to eat ALL THE FOOD. But you do have to drink all the raki.

We watched some traditional Greek music one night, which was hilarious and deadpan. These four guys sat on little stools with their instruments they have obviously been playing since they were 3 months old, their fingers flying across the strings, making incredible music but staring off into the corner of the room like they were on the toilet and there was no reading material. I loved it.

Our favourite day was when we hired a scooter and scooted about the island, visiting beaches and eating Greek salads in all different localities, remarking on the thicker cut of the red onion or the curious addition of parsley in some varieties. We like to think we are now connoisseurs of the Greek salad.

I look very good on a scooter, I have decided, and I would quite like one. Some say you should not wear flappy pantaloons and sandals on a scooter, but it’s all the rage really, and I like to feel the wind against my little toes. I clung to Joshua like a koala bear initially, feeling like I was going to topple off down the cliff side and impale myself on an olive tree, but eventually I loosened my vice grip on Joshua’s beard and relaxed.

We also went to the palace of Knossos just outside Heraklion, which was a fascinating excursion, but naturally we couldn’t enjoy it until we had had a frozen yoghurt and a coffee. Frozen yoghurt is basically every second shop down the street, and I feel like we sampled a good selection of the flavours, a personal favourite being the simple Greek yoghurt with honey. 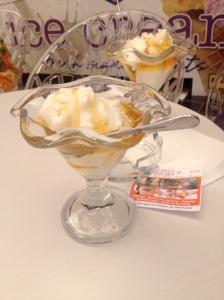 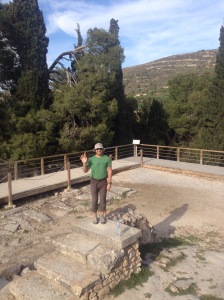 There’s a running theme of food, and that’s not a bad thing. We one day came across a building called “The Cretan Obesity Centre”, with some very sorry figures going in and out. I feel like it was a near miss for us. It doesn’t sound like a good place to go.

So now I return to work in Ireland, with slightly snugger (a word?) pants and considerably less money, resigned to the fact that I will be living off meaty slop and taters for the next few months. 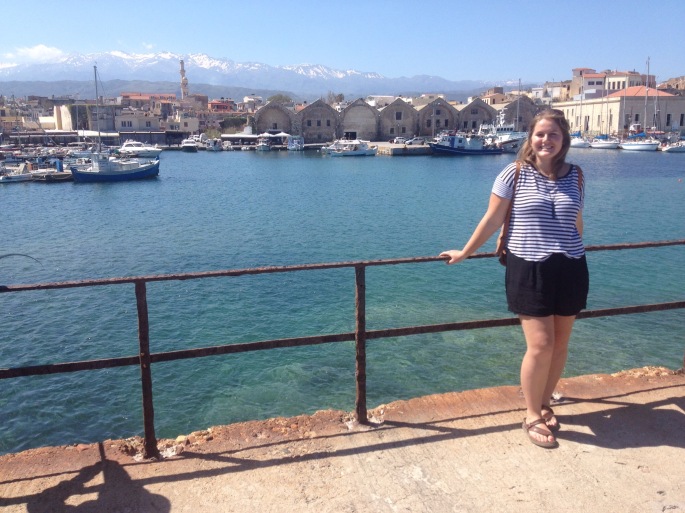 Joshua is off to spend two weeks walking alone across England, sleeping in The Womb and talking to himself, dreaming of donuts.

I think I’m flying over Bulgaria. All I can say is that the paddocks are quite square and the towns are quite small, but then I suppose everything looks quite small from up here.

Having never been to this side of Europe (aside from a drunken haze of a week on Prague), I’m pretty excited to explore the bounties of Istanbul, haggle awkwardly for a pair of homeless person pants in the markets, drink some raki, and dress modestly yet eccentrically because nobody knows me there.

It was a minor moment of stress when my travel companion Asti and I arrived at the airport and made our way swiftly to the North Terminal, as advised on our booking details, only to find there was no such flight to Istanbul at 12.35 on this fine Tuesday. We exchanged dark and foreboding glances and fumbled with our documents, looking up and down and up and down at the departures board, before concluding that we had been jipped ( a word?) by a third party booking service, and we were almost certainly hitchhiking to Istanbul with very large backpacks and one very crippled ankle (see previous tale of stupidity).

But it’s okay. You can breath a sigh of relief in knowing that we actually were just in the wrong terminal, and we merrily rode the interterminal shuttle back to the South terminal with beads of perspiration and relief on our foreheads. Amateurs.

Now I sit, having enjoyed an uninspiring yet somehow delicious ‘Gluten Intolerant Meal’ and a very strong gin and tonic. In most cases, the best thing about having a special meal is that you receive it before every one else, and then can smile a superior smile and relax with the knowledge that you’re pretty much business class. The food itself is generally rank, as if it had been smushed into meat grinder and heated three times before it reaches your mouth. But in this occasion, Turkish airlines has done very well indeed. My opinion is perhaps influenced by the very strong gin and tonic, and the tiny pretty paper cup of pistachio Turkish delight we received at take off.

Airplanes are just quite gross when you think about it – sitting in very close quarters to strangers who are breathing in the air that you recently expelled, the old dry skin dilemma, humans with smelly feet, fat people who take up not only 100% of their own bum space but also 45% of yours, being trapped in the middle seat with a full bladder and a sudden urge to sneeze… It combine all the discomforts of life into a compact package. Yet I do enjoy air travel, in all its grossness,  because it’s a little bit magic and everything comes in neat little packaging and you have endless hours to gaze out the window and imagine tiny people down below. I’m easily pleased.

Coming soon – pictures of myself dressed eccentrically, doing a headstand in front of the Blue Mosque, Turkish delight smeared around my gleeful face, surrounded by hairy Turks who wish to marry me.

Soon we land! Excuse me, I must go and request many tiny bottles of liquor to line my pockets!